I made more food with citrus, because a)  the oranges in California are SO amazing right now b)I believe food tastes better when you cook with the seasons c) my wallet likes it when I cook with the seasons. (Have you noticed how expensive raspberries are in January? Also how gross?).

I also included jerusalem artichoke because a)I read it in a recipe that I share below b)they are also in season c)It’s exhausting cooking rice, potatoes, quinoa or couscous for every meal. And apparently if I don’t cook a carb “I wish death upon my husband and my offspring.” 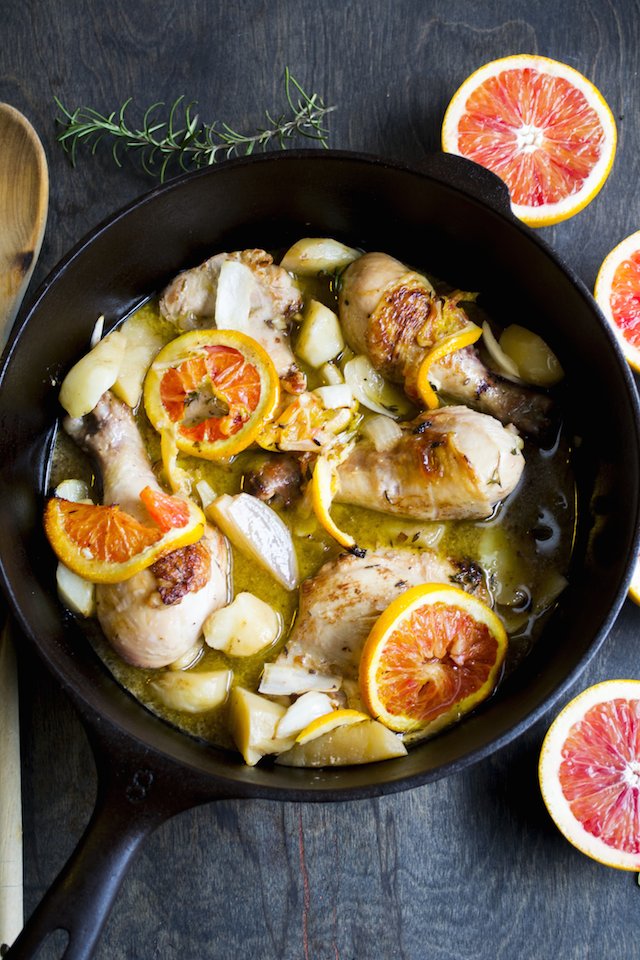 You can use a different kind of orange if you can’t easily find blood oranges at your grocery store. Satsumas would make a tasty version also. However, if you use satsumas, I would segment them, not slice.

This recipe is a mashup of my brain and two recipes from Jerusalem.

The great thing about chicken thighs is they’re hard to overcook. If you are worried they aren’t done, just keep cooking them.

If you don’t have time to marinate the chicken, don’t worry about it. It’s great if you can’t, but if you only have 20 minutes, make do with what you got.

Jerusalem artichoke, also known as sunchokes are in season from November to March, but I believe they peak in January.

Save Print
Prep time
30 mins
Cook time
30 mins
Total time
1 hour
Serves: 6 servings
Ingredients
Instructions
3.5.3208
Have you tried the recipe? Did you like it? I’d love to hear your thoughts. Rate it below!
« Roasted Radicchio, Blood Oranges and Bacon
The Top Ten Pantry Staples Always in My Kitchen »