This post is longer than usual so I’ve set it up into digestible sections. Feel free to skip ahead to the section that interests you most. Or if you like the nitty gritty, read the whole thing.

Kevin Gillespie of Top Chef fame has his newest venture, Gunshow, and it’s only a mile and a half from my house. Joe and I have been wanting to go for awhile and when we discovered that two of our friends, Chris and Jen, have also been dying to try it, I immediately made a reservation.

We showed up for our reservation at 6. The restaurant opens at 6 and within 20 minutes of being seated, the entire place was packed. 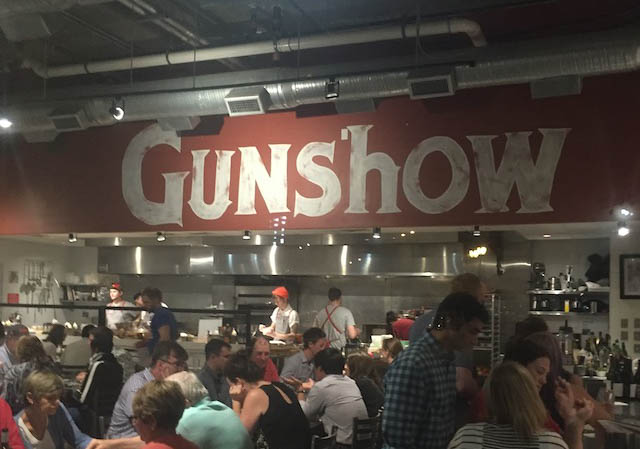 Gunshow has 5-6 cooks who come up with specific food concepts. They run their ideas past the executive chef (Joey Ward) who says yea or nay (based on creating a cohesive menu). The menu changes weekly at the least, hourly at the most. Based on the feedback cooks receive from diners, they may tweak the dish as the evening progresses.

The restaurant operates like a dim sum restaurant. Instead of diners ordering from a menu, each chef prepares their dish and then presents to each table and explains why their dish is amazing. Based on presentation, description and what other diners seem to be enjoying customers decide if they want that particular dish or if they want to pass.

The server assigned to your table ensures the evening is running smoothly and helps with any need that may arise (like another Old Fashioned).

What I Love about Gunshow

There are a couple of things I love about this restaurant. The chefs receive immediate feedback from the diners (choosing the dish or not). It forces them to stay interesting, delicious and relative. If the dish doesn’t look good, sound good or taste good, very few people choose it.

I love that it’s like a chef’s tasting menu without the price tag. They curate a very small menu and you can try as much of that as you want.

But the greatest thing about this restaurant is that it’s a show. So when you bring an entire slab of jelly rolled pork belly and carve it at my table—not only am I impressed, but I’m going to order it. Even if you do pair it with pickled okra.

They have a handful of wines, beers and drinks they make in the kitchen (which means you can only order off the menu, no cosmos here). And then a mixologist has a cart she pushes around the restaurant and makes additional drinks table side — which lets be honest, is awesome. I started with a glass of Rosé, but finished with their take on the Old Fashioned, which she lit on fire as she set it before me.

Showmanship at this restaurant is a requirement.

I knew that the chefs hawk their creations to each individual table, but I didn’t know you only get one shot at each dish and if you say no then you’re SOL to try it later. So we felt a reasonable amount of pressure as the plates came out.

We were still waiting on our drinks when the first dish arrived. The first chef, who’s name I can’t remember even though I asked 12 times, brought out Japanese Style Mussels. The pressure of it all made me want to take everything that showed up at our table, but my table mates in their wisdom (or foolishness, we’ll never know) declined the first dish.

After the mussels, out came The Soft Egg. I was inclined to continue with the nos. But fortunately at the last minute, Chris said yes, we need this dish. And it’s true. We needed it. Under neath the squid ink parmesan crisps was a soft egg that oozed all over the lentil prune risotto. The black garlic puree added the perfect note of flavor. It was the second best dish of the night. Made by Joseph. 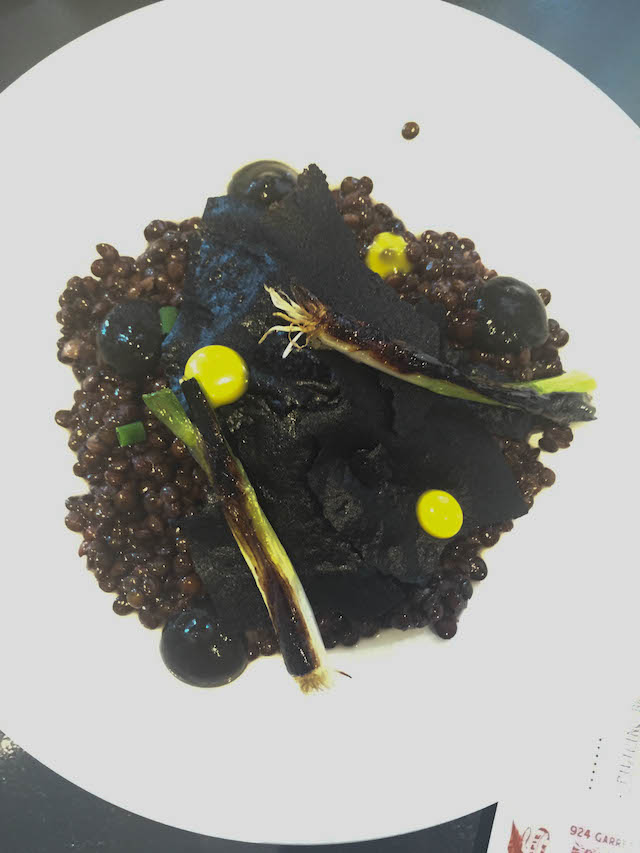 I’ll be honest, the Kobe Beef Tartare was good tartare and it was Joe’s favorite dish of the night. However there wasn’t anything imaginative about it. It was tartare, it had sesame oil, it was good. It didn’t change my world. Made by Spencer 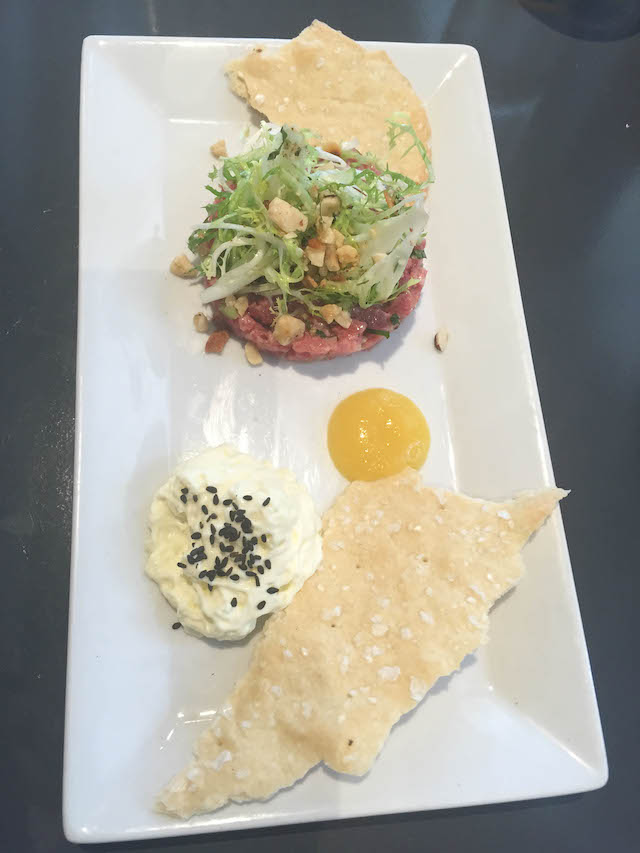 The Octopus with Saffron Quinoa however did change my world. As far as seafood goes, there is nothing worse than rubbery over done octopus (okay that’s not true, there’s a lot worse, bad mussels for starters) but still. This octopus was tender, smokey and the accoutrements were on point. Although I will say, while the quinoa was good I think the saffron was unnecessary. (I don’t think it had a significant enough impact to the dish, and saffron, when used, should be significant.) And the yogurt mixed with the octopus and quinoa and charred eggplant — stttttoppppp. Made by Joseph. 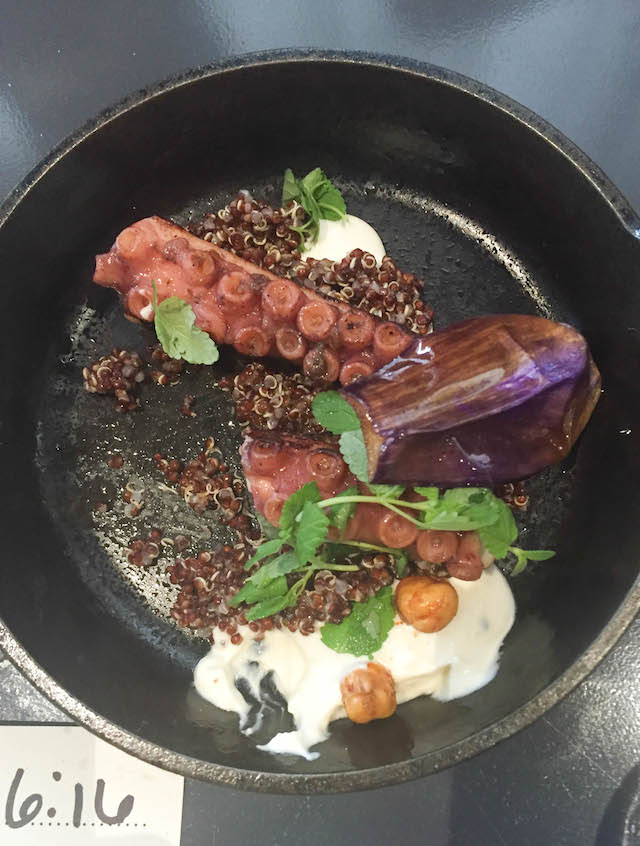 My favorite dish of the night

Kung Pao Brussel Sprouts: I mean, I know I just posted my own version of brussel sprouts as an appetizer, but in a restaurant like this, it just feels a little dated. Also it was a little heavy on the sauce. But, also, if I’m the executive chef (which he was) they sell. Restaurant goers like brussel sprouts and they’re willing to spend $8 for $1 worth of sprouts and sauce, so that’s pretty good profit. I’m glad we ordered it, but if we were limiting our options, I wouldn’t have wasted the stomach space. Made by Joey. 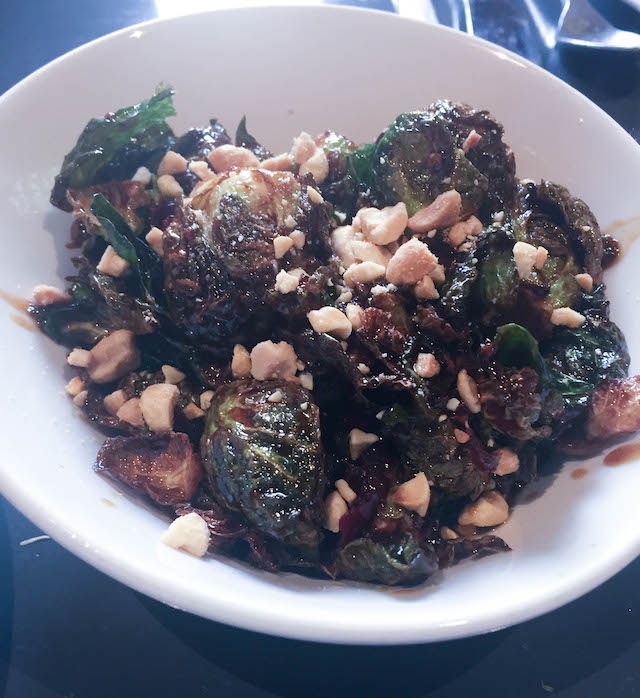 Filipino Braised Short Ribs. I had high expectations for this dish. It was one of the more expensive ones on the menu, and braised short ribs, Come on,  you can’t go wrong. It was good. It was cooked perfectly. It had a little spice but not too much. But it was forgettable. I liked the mushroom. Made by maybe Chris? 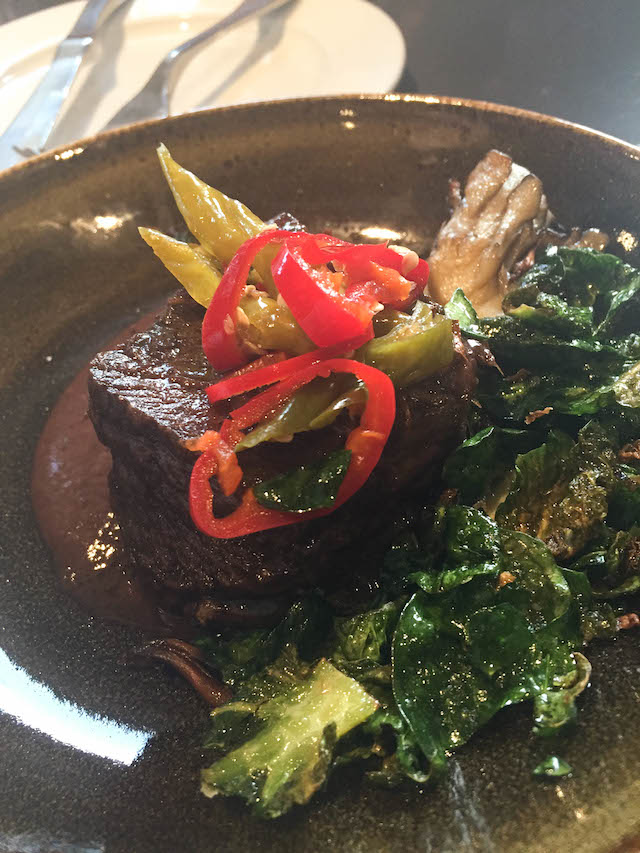 Maple Pork Porchetta. The answer to pork belly is always yes. I don’t care if it’s been dipped in petrol, you eat it and you like it. This dish was carved table side. It came with a pickled okra, tomato gravy (what is tomato gravy anyway?) and potatoes that were supposed to be crispy, tasted delicious, but were not crispy. I liked the vinegar on the okra, and I know southerners will never give up on their okra, but I really wish they would. Okra is not the new kale. It’s slimy and just go away okra. No one likes you. Made by Spencer.

Pan Roasted Red Snapper. I love snapper. I love celeriac. I do not love muscadines or sunchokes. I was conflicted when this dish arrived. We said yes, and I’m glad because really when you go to a restaurant like this, you need to say yes more than you say no.

The snapper was perfect, the celeriac was pureed, the sunchokes were diced perfectly and roasted, the muscadine I didn’t notice. But still it lacked in anything memorable. I went to the restroom when they brought this out, so I don’t know who made it. 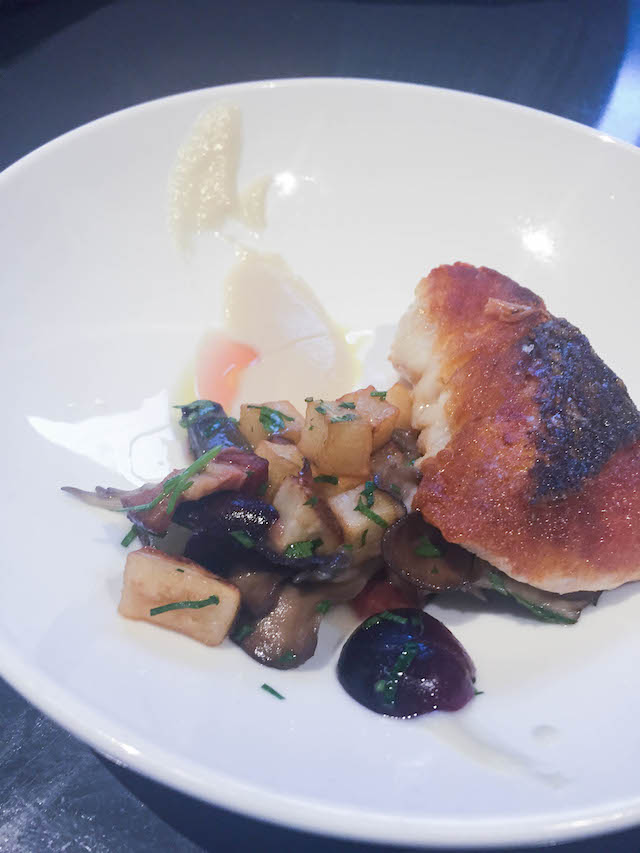 Cornbread Panzanella. We passed on this initially but fortuitously a new table sat down beside us and we were able to snag one at the very end of our meal. My table mates loved this, said it was one of their favorites. The cornbread was crispy on the outside and soft on the inside. I liked that. It had goat cheese, I liked that. It had sweet tea vinaigrette, I liked that in theory but think it made the whole dish too sweet. I was in the bathroom for this one too, so don’t know who made it (apparently I went to the bathroom a lot this evening). 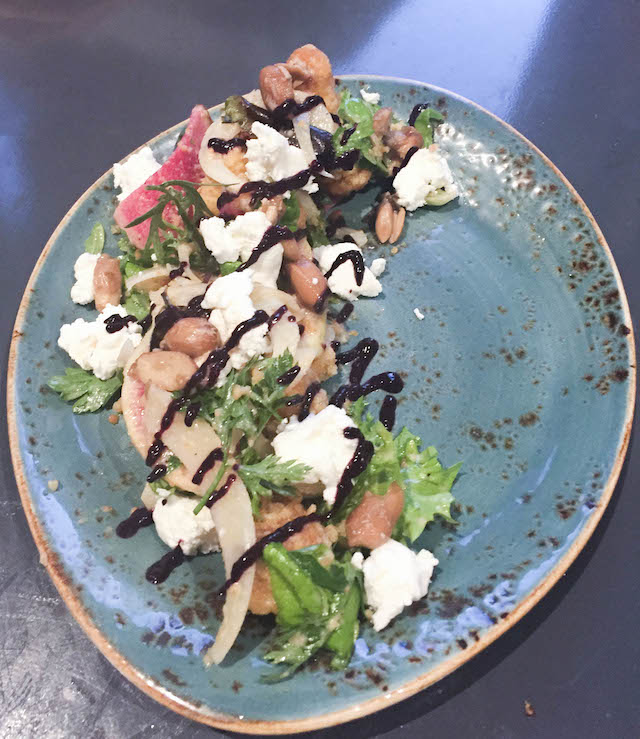 Bless my heart, we ordered all three and that was a very good decision. 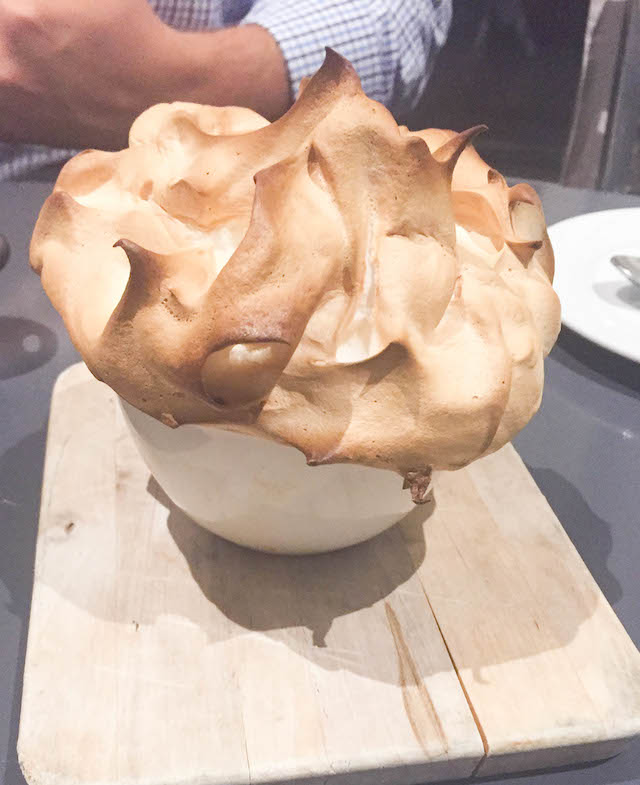 Rocky Road. You can’t go wrong with homemade marshmallows dipped in bourbon and then scorched, homemade chocolate business and a creamy salted thing that was the perfect touch.

My favorite part about this is that it was big. When you go to restaurants and order desserts, they should be big, and here’s why. Usually one person orders dessert because they have logically thought this through and decided — I like chocolate, I’d like to have some of that chocolate. And the other diners, who appear to be in their right minds, decline dessert because, “they’re too full.” Which leads me to believe that they don’t want to eat the chocolate, which is fine, it’s a free country, it’s their life. You do you.

But inevitably, (I’m looking at you Joe) as soon as dessert shows up they’re all, “I’ll share yours.” The hell you will! This is my chocolate, you want chocolate you order your own. But then it’s too late, and also the server, in his fore thought of mind brought three extra spoons and then it’s three against one. So that’s why I liked this dessert. It’s big and also please, look at it, so yum. 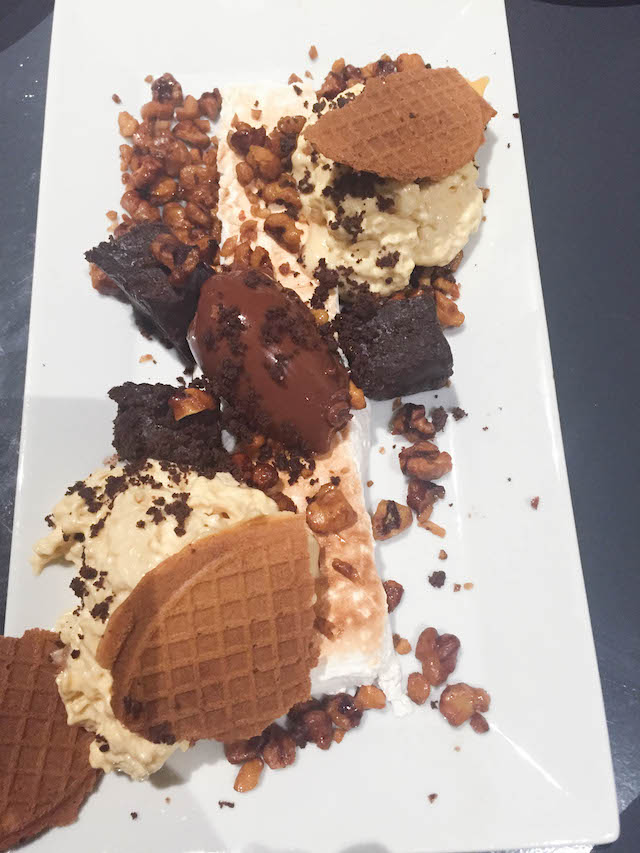 Cinnabon Bread Pudding. This was also delicious. Seriously, who doesn’t love bread pudding made of a cinnamon roll! It was saucy, drippy goodness with homemade salted carmel gelato, apples and a little brown sugar crumbly thing on top. I didn’t hate it. 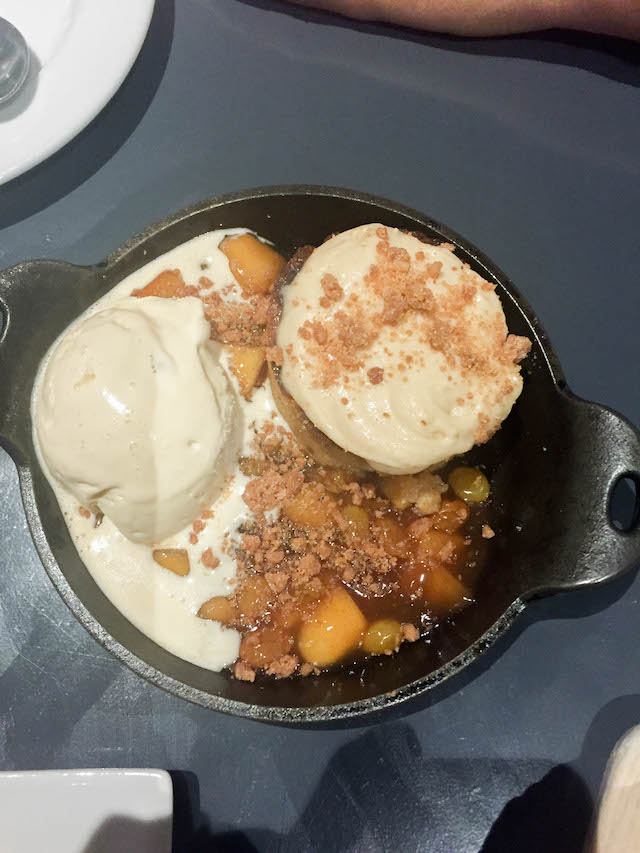 The Fine Print for Eating at Gunshow

Their website says they have two seatings 6:00 and 8:30 although some people sat down beside us at 8:00pm – do with that what you will.

This is a place to be adventurous. If you’re not an adventurous eater or don’t like being surprised, this is probably not the restaurant for you.

Reservations can be made up to a month in advance. And if you want a reservation on a Friday or Saturday, then you need to get up at 0′ dark thirty a month in advance to the day that you want the reservation. Fridays and Saturdays are the best nights of the week to go (the chefs have been practicing their dishes all week by this point). Reservations for these days are gone as soon as they become available.

When I go again next month I plan on taking whatever Joseph brings to the table, I don’t care what it looks like. I like his flavor profiles.

The first time you go, plan on spending a lot of money. You want to enjoy the process, not penny pinch your way through. Try and say yes as often as possible – allow the chefs to surprise you.

Dress is funky nice. Jeans and heels are fine (if you’re a girl), jeans and havianas are pushing it. The servers wear t-shirts, so there is a relaxed vibe to the place, but smart people eat here, so dress smartly. How you dress communicates how you feel about your host.

Four is the optimal number of diners in a reservation. It allows you to try the most things while getting a big enough bite. If you only have two people, you have to be a bit more selective and if you have six you get very small bites. (If you have 10 then you pre-select items you want and they do family style).