Joe and I were in Nashville last week for work. Awhile ago my friend Jessica (chef at KR Steakbar) suggested we try out Sean Brock’s Husk restaurant the next time we were in Nashville. So before driving up last week I made a reservation. Thursday night we left the boys with a friend and jumped over to the old (small) plantation(ish) style home for a late dinner.

Husk is a bit of a mashup of modern meets old south. The charming brick home has a cozy entrance, an open kitchen and tables set up throughout the house. We sat in the basement overlooking the restaurant garden. (Well it was night so it overlooked black nothingness, but I assume during the day it overlooks a darling little garden.) Servers bustled around in blue plaid shirts and levis. Joe started out with a whiskey cocktail (he didn’t get the most expensive one, which was $80+), I had a glass of wine.

Our server Porter was knowledgeable and helpful. He gave us a slew of recommendations, all of which we ordered. 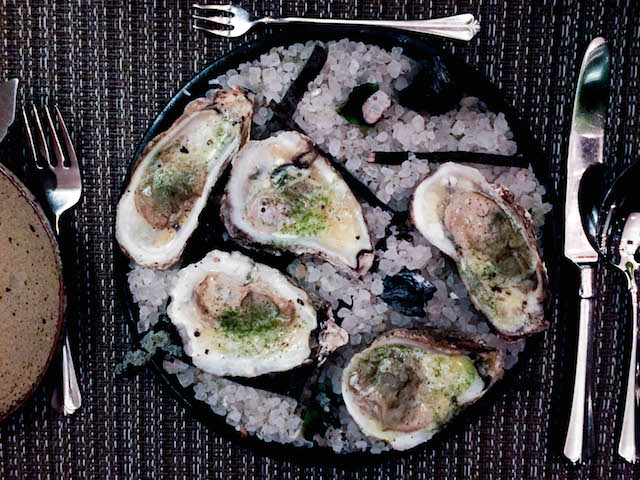 These Rappahannock Oysters were roasted over embers (which really means they were warmed over) with a bone marrow butter that melted into fatty goodness over top of the oyster. It was served on a bed of rock salt and twigs. And our twigs even had ants, which I can’t decide if it was cool or gross. Joe ate one of the ants, so we’re going with cool, cause otherwise we’re just a couple of weirdos.

The melted bone marrow combined with the warm oyster made the dish taste almost like a cheeseburger. They were so yummy. I do wish they had used a smaller oyster from a different region. I find the smaller oysters to be sweeter and not quite as meaty. Regardless, they were delicious. 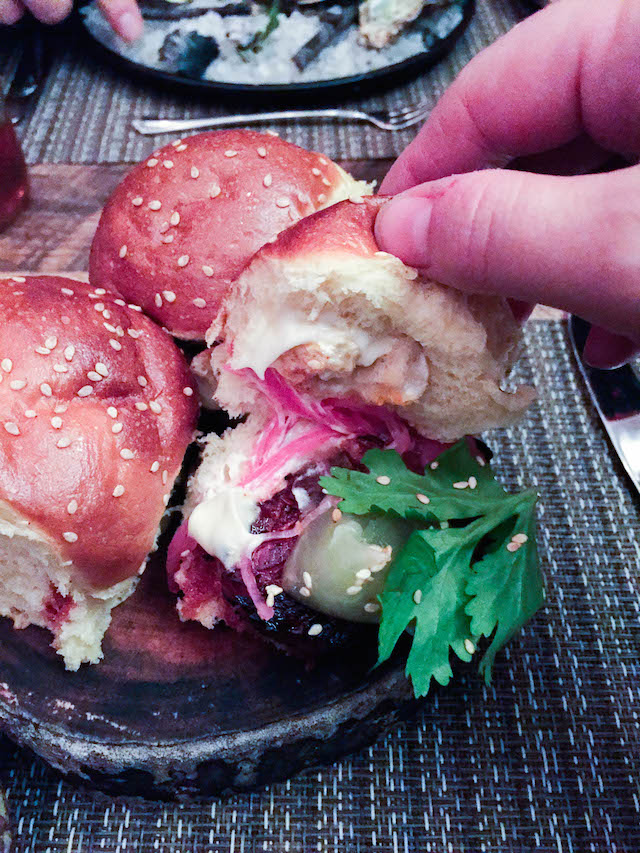 These were my favorite dish of the night. Husk seared the pork belly perfectly and glazed it with the southern classic, Cheerwine. It melted in your mouth. And paired with pickled red onions, a little cilantro and smoked mayonnaise, it was the perfect bite. I just wish I had twelve of these instead of three. And I wish that Joe didn’t make me share with him. 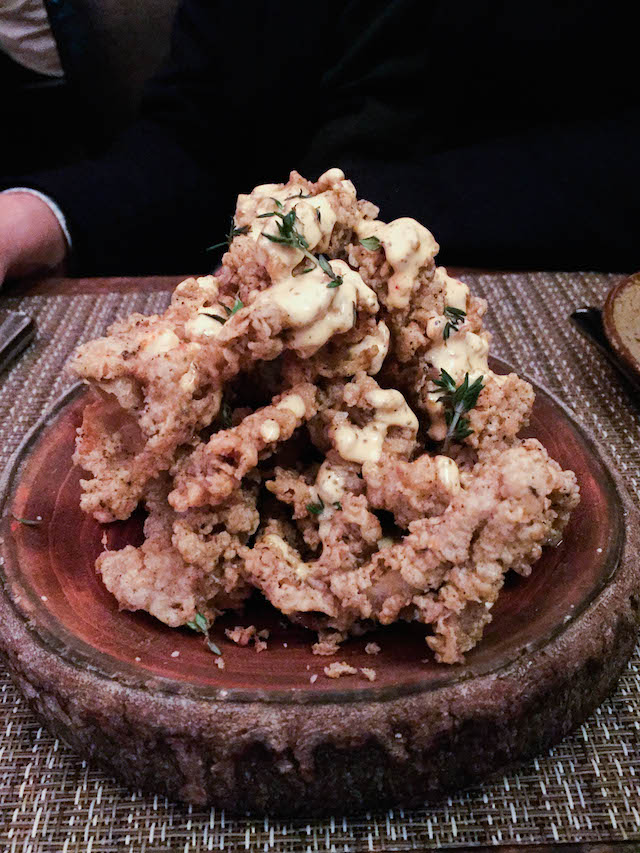 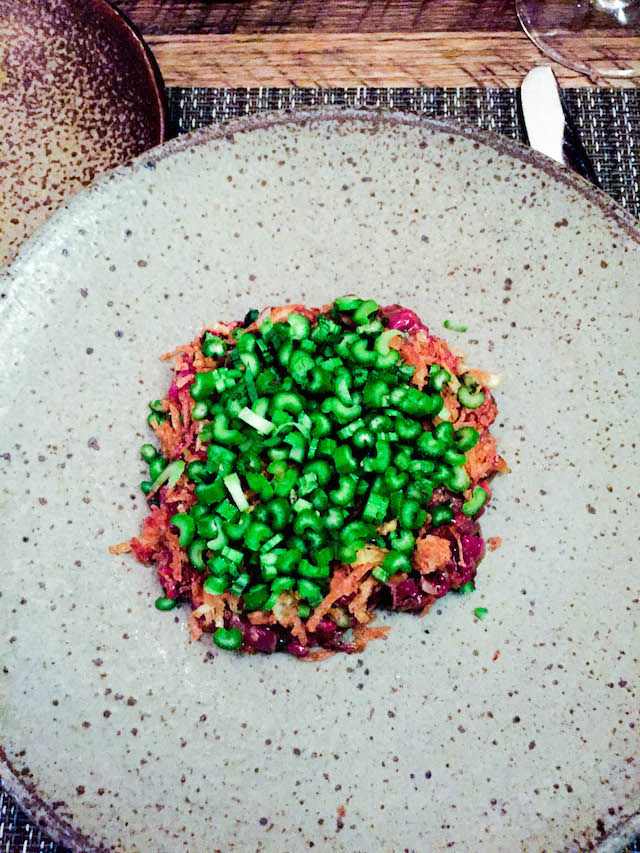 Joe and I both love beef tartare. We usually order it when it appears on a menu, but I will say that I continue to be disappointed in foodie restaurants take on beef tartare. This one came with pickled ramps, crispy potatoes and doused in celery. To be sure, it was Barefoot Farmer celery and it was delicious. But also, crunchy celery in your beef tartare? Come on. The flavor of the beef was good, I just couldn’t get past the celery. 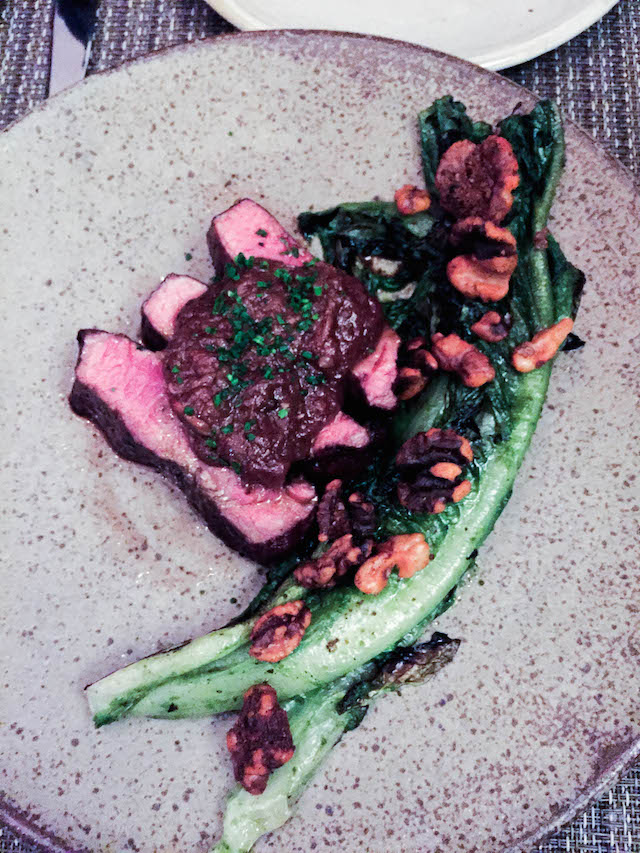 Since we got four app plates we decided to just split a large plate. We ordered the flat iron which came with grilled romaine, oxtail jam, sauce piquant and walnuts. The oxtail jam was too sweet for my taste, the steak came sliced (which really bugs me) and bordered on medium, instead of medium rare. The walnuts were just meh. But the grilled romaine was the star of the entree. (To be sure I’ve been a sucker for grilled lettuces since I first had them in China 8 years ago). It was just so flavorful, I loved it.

Husk was good. They’re doing something interesting and innovative. It wasn’t my favorite restaurant, but southern style food also isn’t my favorite. Maybe the Husk in Charleston is better, I’ll try that one next time we’re there and let you know!

What’s your favorite Nashville restaurant? What should I try next time we’re there?